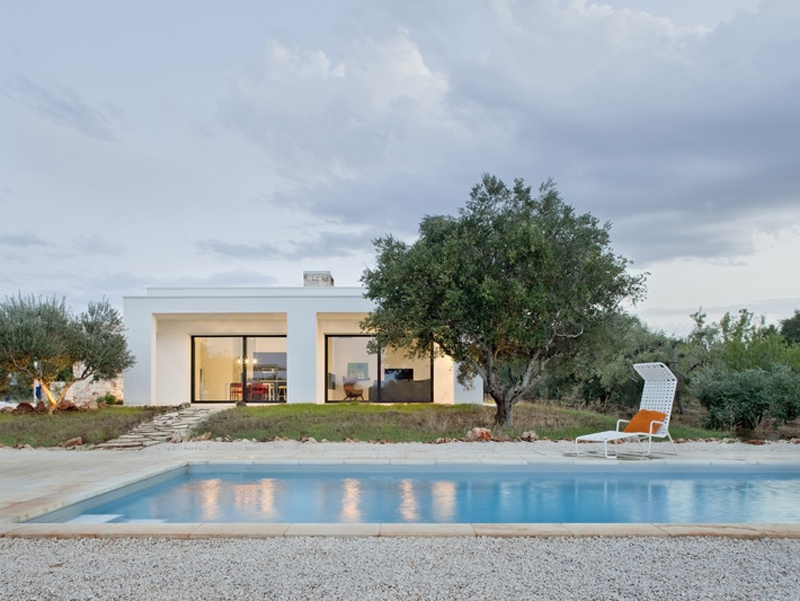 Maison SS is an Italian holiday home that takes place in the heart of a young olive grove in the countryside of Ostuni, in the Valle d'Itria region (Puglia). The volume, white and pure, stands out in the surrounding nature for its simple forms, representative of the traditional architecture of Puglia. All enhanced by infusions of more contemporary details.

The SS House which fits between the rows of an olive grove is made of exterior finishes reminiscent of the traditional rural architecture of the region: walls plastered with white lime or local dry stone, exterior slabs in Apricena stone , white painted metal gazebos with a bamboo cover. For the contemporary touch, it is necessary to enter the places whose interior is characterized by contrasts between the white of the walls, the gray of the micro-concrete floor, the black of the windows, doors and kitchen, and the colors sober furniture.

During the development of the project, particular attention was paid to sustainability and the use of renewable energy sources. In addition, the predominant white prevents overheating during hot periods while the large windows of the house are equipped with solar protection. On the roof, a photovoltaic system produces electricity which powers the heat pump for the air conditioning of the house. LED luminaires have been chosen for the lighting, thus saving 50% of electricity while their life cycle is much longer than traditional systems. In addition, a rainwater harvesting device has been installed to store it in an underground tank for reuse in the garden.