Attached to Paris, and more particularly to the Belleville district, the artist Pierre-Emmanuel Lyet immerses us in a festive, luminous and joyful city through colorful drawings. Between fantasy and reality, his series “Mirages”, which was exhibited in October at the SLOW gallery, evokes the landscapes of night owls and invites us to remain positive in these troubled times. Meet.

Muuuz: What is your background?
Pierre-Emmanuel Lyet: I studied Decorative Arts in Paris, in the animation and graphic design section. After my diploma, I worked for ten years on animation projects, notably short films (Parade in 2009, La Nuit Américaine d'Angélique in 2016), short programs for institutions or television (Pierre et le loup in 2015) and music videos (Origami for Rone in 2018). I worked with minimal graphic writing, with a lot of typography, and I learned a lot about art direction and being at the service of a global project.

Today you draw a lot. What place does drawing occupy in your artistic practice?
Five years ago, I took a trip to New York and got back to drawing. I had no particular pressure, it was really for my pleasure. I wanted to go back to something more organic. I wanted to work on a personal writing that would be directly written on the paper with little digital intervention. This has led me to exhibit my work on several occasions, notably in the “Let Go” exhibitions in 2016, “Temps Retrouvés” in 2018 and “Mirages” in 2020. What was initially a side-step has gradually taken off. little more room in my professional activity: I had orders from the press first, then from publishing. Today, I share my time between illustration and animation. These are two practices that feed off each other.

In your opinion, the “Mirages” series is “an exploration”. Why ?
It is first and foremost an urban exploration. I wanted to venture into the Paris where I live, the one I know well, that of the heights of Belleville and the hill of Ménilmontant. It's a very endearing environment, sometimes a little dirty, but it's my city. I was born and raised in Paris. With "Mirages", I think I needed to draw things that you don't see often, from a steamy bus window to a crowded bar terrace, from a suburb roof with disparate 20th century architectures. arrondissement, but exploring them at night. These are images that haunt me, that are in me.

What is the originality of this series?
The more I went, the more I wanted to push the limits of the medium I use: colored pencils. I wanted to see how far I could go. I wanted to infuse a dose of fantasy and I turned to fluorescent colors which added a certain weirdness to my images. I think that thanks to these colors, the drawings are not naturalistic and that they cast doubt on the veracity of these moments. It was especially this border between fantasy and reality that interested me.

What does its title refer to?
The "mirages" are those moments lost in our memories, these innocuous little moments that we remember and of which we are no longer so sure of the veracity. Did I see these two young people on the roof of the building? I do not believe. But I still have the impression of having lived it, so that I draw it. The drawing allows, somewhere, to invent its own reality.

You live in Belleville. Daily life in this neighborhood inspires you, and you often portray everyday scenes in cityscapes. What is your relationship to architecture? What is its place in your works?
When I started my art studies, I preferred perspective classes. We wandered around Paris, we found a piece of the sidewalk and we drew. I loved this simplicity. In general, I have always been sensitive to the architecture and identity of cities: when I started working, I moved to the 19th arrondissement, and it was a visual shock. Having grown up on the Left Bank, I discovered these districts where modern buildings rub shoulders with Haussmannian or suburb buildings. Some people find that sometimes aberrant or ugly. Me, I see a certain beauty in it: a diversity that also works in mirror with its inhabitants. I always discover new things in these neighborhoods and it is very rich visually, like a big playground - and humanly too. I wanted to include this dimension in the exhibition, for example by drawing the rue de Belleville and its nocturnal effervescence or the buildings on rue Pixérécourt, which is a good example of this diversity.

Between fiction and reality, your drawings immerse us in scenes of joyful life. What emotions do you want to arouse in the spectators?
I think the last few months have been difficult for the Parisians. We are very attached to our cafes, our streets, our public spaces. Despite all the ills that this city and its inhabitants are accused of, we love the party and the warmth of human contact. I wanted to talk about that in my drawings. In Palo Alto, we see thirty-somethings on the terrace of this bar chatting, laughing or smoking cigarettes. In the foreground, I drew this young woman whose face is cut in half. We only see a worried look and his gaze looking up to the sky. Perhaps she is wondering what is still in danger of falling on us? I wanted to touch the hearts of those who know these neighborhoods and this city as I know it, and show others its uniqueness. Some of the drawings were made during containment. Paradoxically, it was during this period that the drawings most full of hope and joy came. I drew what I needed to feel. I finished my “Mirages” series at the end of the summer with Celebrations. Drawing all his people partying, at home, on the roofs, in the street, it was almost cathartic. I felt like I was sharing this with lots of people and freeing myself from the pressure of confinement. Today, many people talk to me about this image as a remedy for depression. It makes me really happy !

To learn more, visit the site of Pierre-Emmanuel Lyet. 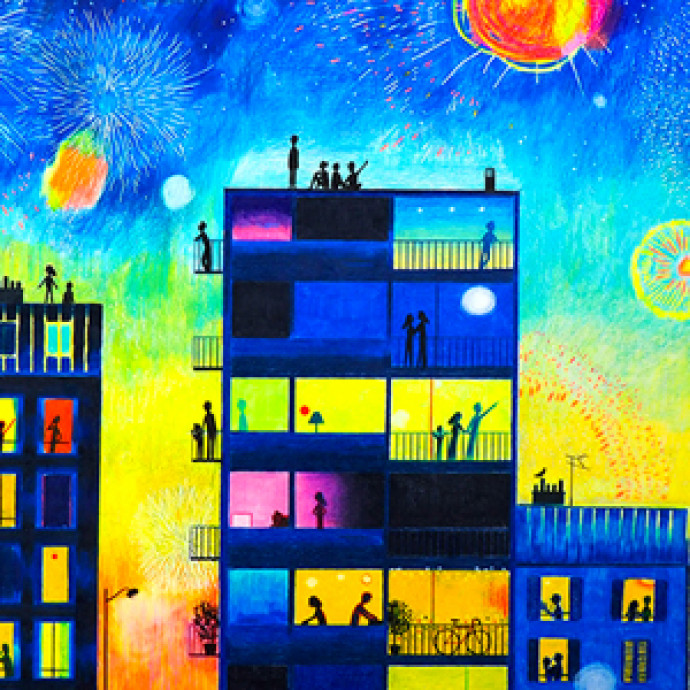 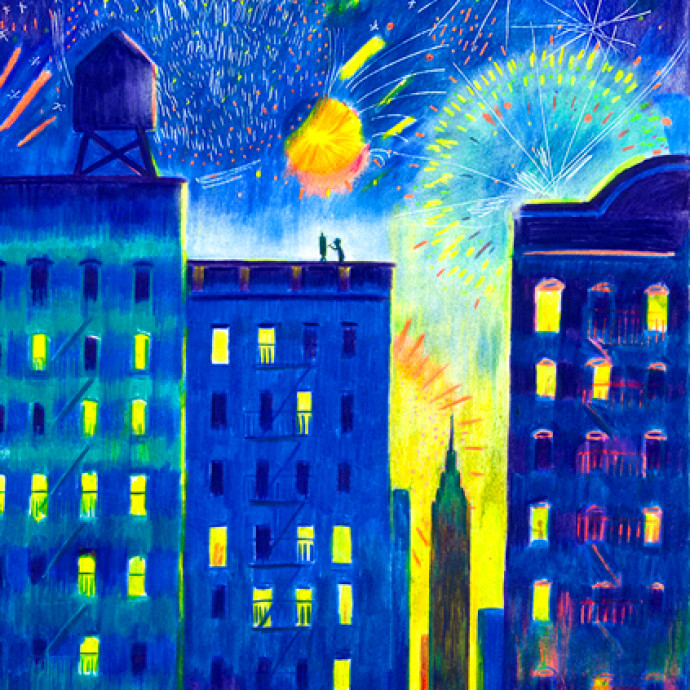 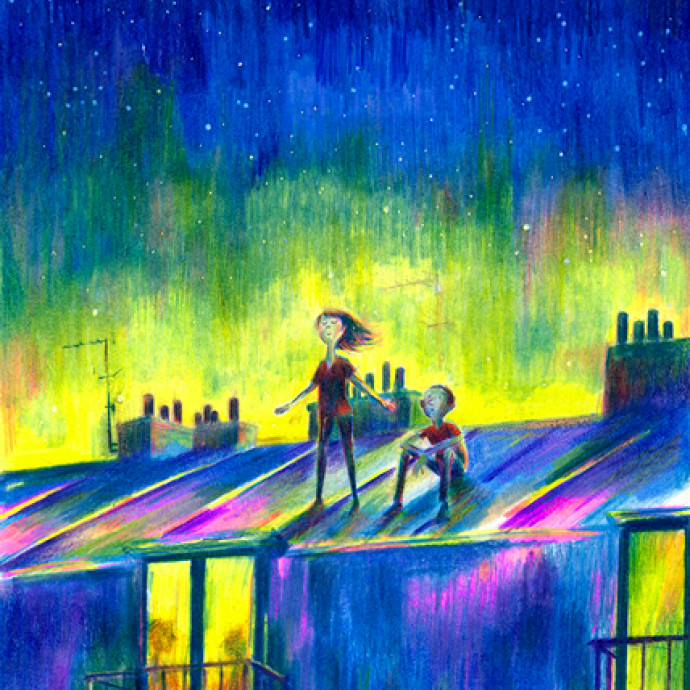 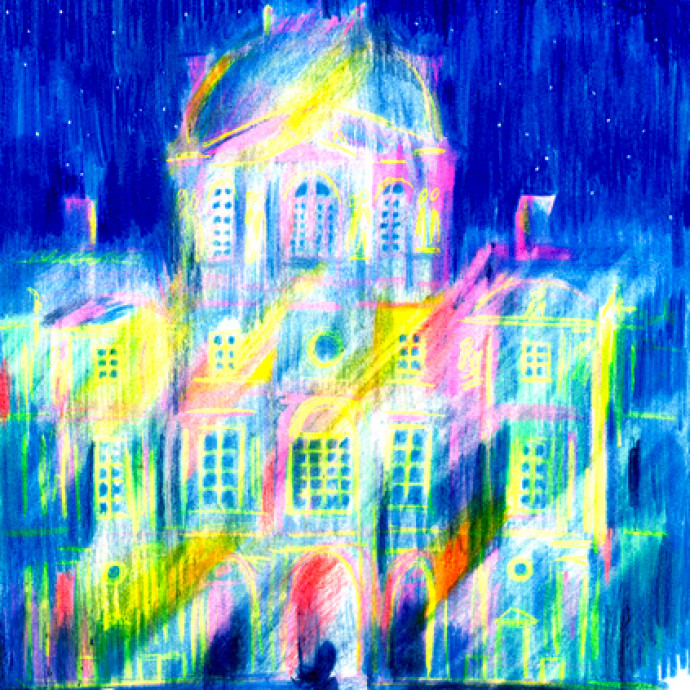 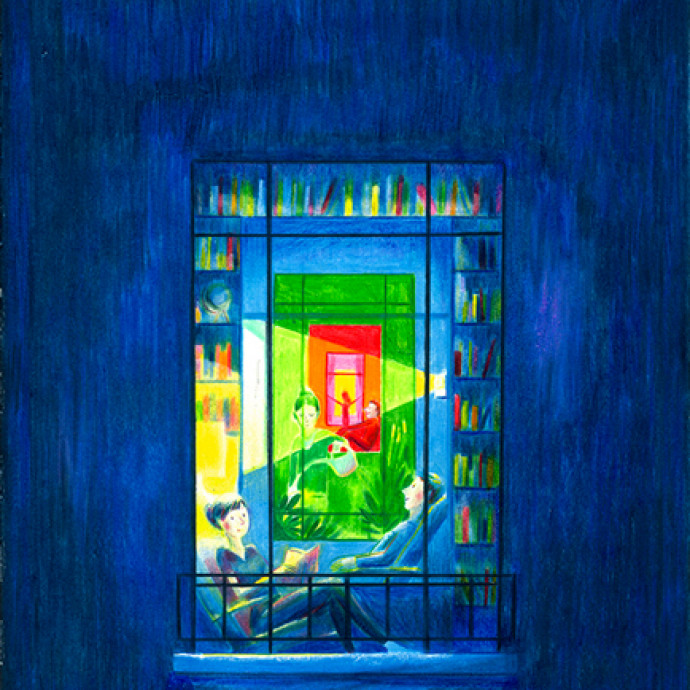 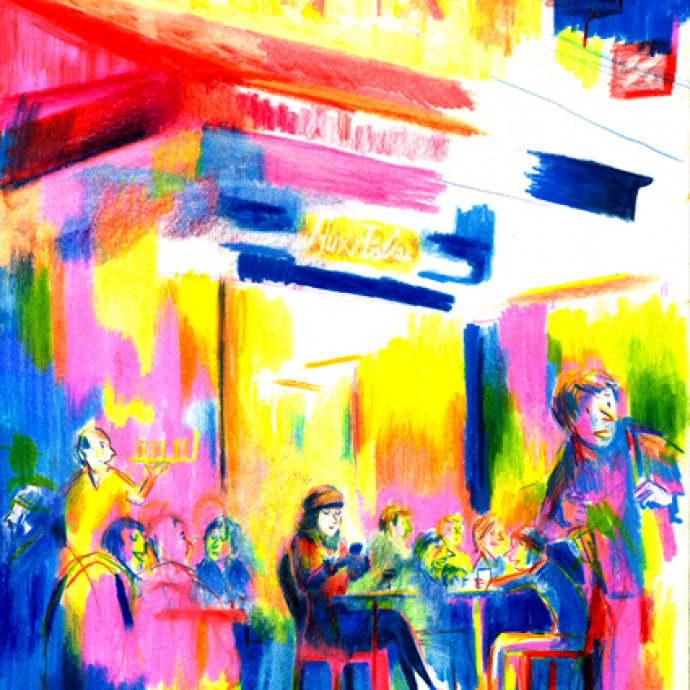