Long considered a passing city, Lyon (69) is now one of the major French cities. Capital of European culture in 2013, land of the Festival of Lights, Biennale of Contemporary Art, and now hosting the World Cup Women's Football, Lyon has nothing to prove. It may still be a place worthy of its ambitions, between luxury and heritage. And that's where Jean-Philippe Nuel comes in.

Nestled in the heart of one of the most impressive monuments of the capital of Gaulle, the Intercontinental Lyon Hotel conveys the history of this former hospital architecture exceptional. Closed in 2010, the hospice welcomed sick and pregnant women for nearly eight century, having - according to legend - contributed to the birth of a Lyonnais out of three for several decades. Featuring a monumental facade of 360 meters running along the Rhone, the Hotel Dieu is an architectural gem, adorned in particular with a large dome culminating at 32 meters signed Soufflot, famous for being the chief architect of Notre Dame of Paris during 20 years and for having realized the Pantheon between 1757 and 1790.

The rehabilitation of such a heritage property - including the largest private renovation of a classified site - contained of course its share of constraints and should in no way denature the building constituting one of the epicentres of the city lights. In order to enhance the spectacular envelope in which the place of residence takes place, the interior designer Jean-Philippe Nuel recommends an atmosphere "Monastic and precious" in his own words. A humble and discreet luxury, not especially stealing the limelight from the stone and volumes of the Hôtel Dieu, but, on the contrary, creating a bridge between the rich history of the old hospital and its new life, between the nineteenth century and the contemporary period.

The 13 square meters of the Intercontinental are spread over 000 floors. The ground floor, split in two by a central street open to all, includes, on the one hand, a reception area and on the other, the Epona restaurant, a bright room opening onto a peaceful terrace with cloister-like. Set back on this level, a 3 square meter conference center called the Academy sits in the old pharmaceutical garden and has 1 modular meeting rooms, including a plenary of 500 square meters.

The second and third levels are dedicated to 144 rooms and suites divided into several categories constitute a harmonious set of penates with similar textures and color choices. Ranging from 28 square meters for Superior Rooms to 40 square meters for Deluxe Rooms, the first category offers views of the historic courtyards and gardens of the Grand Hotel-Dieu while the Executive Rooms with views - of the same size open on the district of Fourvière or the Rhone.
A panorama on the river which also benefits the tenants of the Duplex Suites (45-55 square meters), emblematic rooms of the inn. With large double height windows measuring 7 meters, these apartments include a living room on the ground floor and a sleeping area and a bathroom in the basement.
Greater Lyon Suite, the Presidential Suite concentrates all the luxury of the establishment in its 150 square meters (which can extend to 210 square meters thanks to two communicating rooms). Obeying a different color treatment than its neighbors, its decor alternates floral patterns and shades of red and opens onto a balcony overlooking the Grand Dome.

An exceptional space, this Grand Dome is the heart of the hotel. Once home to a chapel open to the rooms where the sick, the cupola of 500 square meters now houses the bar of the hotel. With its neo-classical architecture and its groomed marble floor, the place only sought to be sublimated without much effort. Jean-Philippe Nuel has tackled this task by proposing elegant and discreet furniture, alternating convex banquettes in plain canvases of 7 meters long and Lyonnais silks Verel de Belval. So that customers do not drink their cocktails in an inaudible hubbub, the master installs large screens with acoustic properties appearing as a second skin. Works by Manuel Paul Cavaillier finish to dress this already exceptional place.

A temple of luxury and good taste, the Intercontinental Lyon - Hôtel Dieu restores its nobility to a neglected monument for almost 10 years.

To learn more, visit the site of Jean-Philippe Nuel. 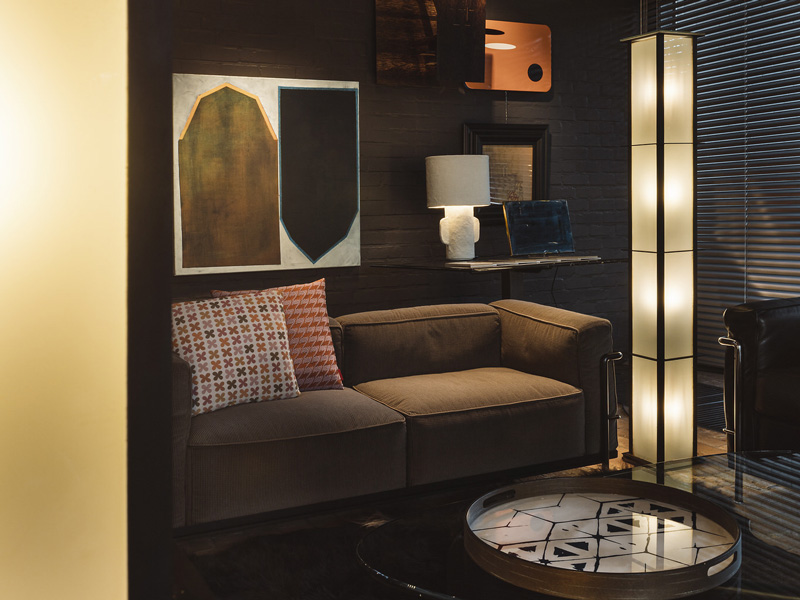