Iconic in more ways than one, 83 Marceau, the new Parisian headquarters of Goldman Sachs, is the archetype of a successful transformation renewing the image and use of an emblematic Parisian building.

This building, which overlooks Place de l'Etoile, has been completely restructured by architect Dominique Perrault. Mandated by the SFL (Société Foncière Lyonnaise), interior designer Ana Moussinet carried out the interior design of the Apostrophe, located on the ground floor of the building, which includes a Business Center of nearly 1200m2 and service areas around the central patio: 200-seat auditorium, lounges and meeting rooms, place for sharing and meeting.

This is not the first project that the SFL has entrusted to Ana Moussinet. After enhancing the service spaces of Washington Plaza, spaces of Edouard VII, or even those of the Louvre Saint-Honoré, the SFL, owner of a prestigious building, was seduced by the approach of Ana Moussinet wishing to beyond architecture, place people at the heart of the project, explore space and use to meet the needs of a service-based society.

The hotel issue has forged his analysis of the interactions between life and work, transposing his expertise in this area has become obvious. It is after all the same person who leaves his hotel to go to his place of work. It is the environments annexed to specific functions that she seeks to explore, these in-betweens which are places of life that she likes to enhance.

The concentration of functions and the fusion of uses, on two levels, around a vegetated and bright patio, allow employees to live several experiences in one. Singular new ways to work and relax within a sculptural space.

The challenge was also to give an identity to this ensemble while being in phase with Dominique Perrault's proposals; close collaboration materialized by a common perception of volumes and shared spaces. Echoing the work of Dominique Perrault, Ana Moussinet imagined a vibrant skin combining wood, mirror and terrazzo, to give rhythm and energize the envelope of the auditorium. This equipment had to be identified and identifiable. If the work refuses to associate a material with a function, it prefers to focus on visual perceptions. Also, everything has been thought out in a harmony of midnight blue color through gradients ranging from matte to shiny.

The continuity of the floors between the reception and service areas, the presence of mirror-polished stainless steel, as well as the vertical sequencing of the walls, punctuate the spaces.

An experiential program is planned to animate the spaces, modulate the uses and make the link with the openings designed by the agency Dominique Perrault Architecture. The muted presence of walnut and the harmonious gradients around a single shade of midnight blue, from the paints to the fabrics that adorn the pieces of furniture made to measure by Ana Moussinet for the project, bring a refined and contemporary touch. The high point of Ana Moussinet's intervention, the auditorium has been worked like a vibrating wooden skin like an origami, which rhythms and energizes its envelope and its background, and the listener at the same time.

The spaces are organized around the patio which irrigates the functions with its light and its plant atmosphere; reception, meeting rooms, lounges and lounge bar. This precious link to daylight is relayed by a set of curved luminous gaps in the ceiling which guide the employee in his work and relaxation journey, and always keep him in contact with an escape, a perspective, an opening, towards the natural light. 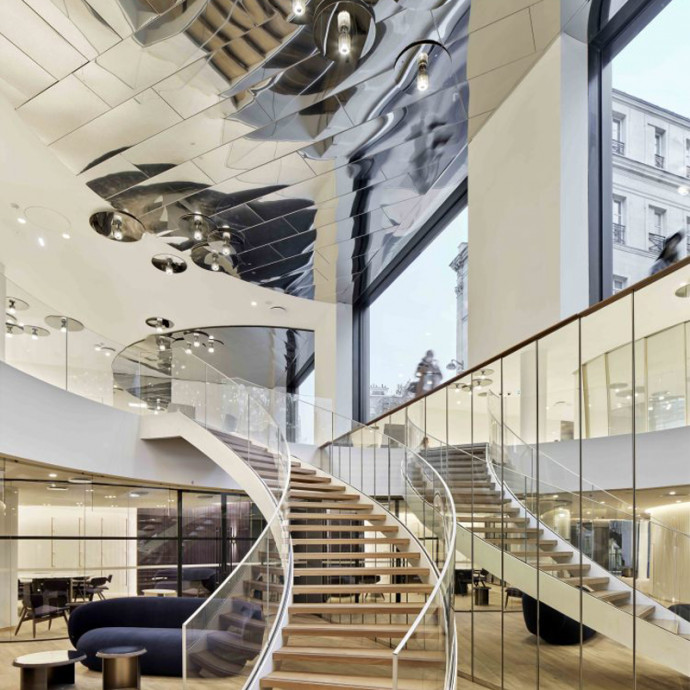 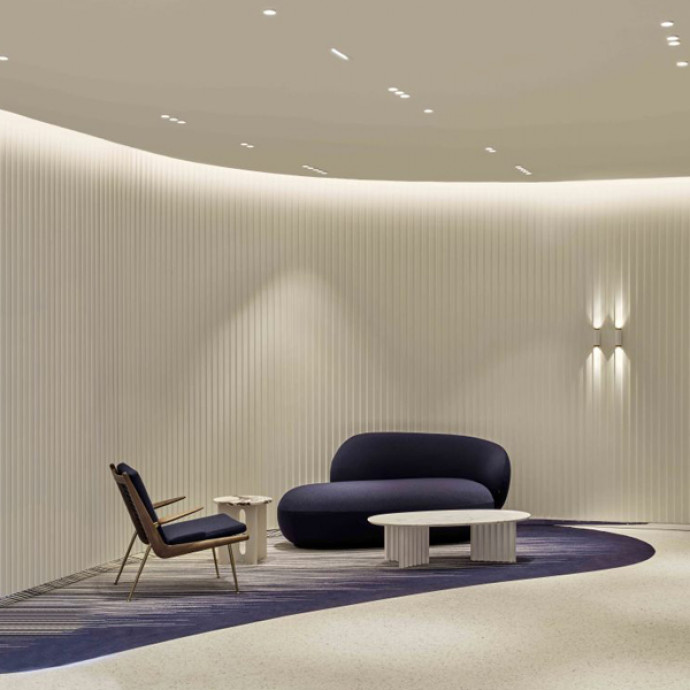 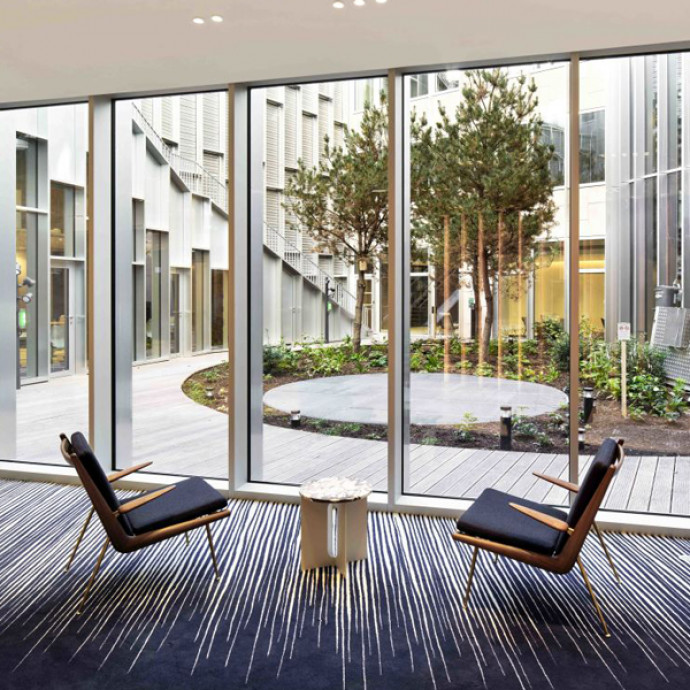