The Belencontre neighborhood Tourcoing has been a ANRU project (National Agency for Urban Renewal) extensive. This housing rehabilitation operation built in 1950 / 1960 years has been programmed in three stages. For the second, the use of terracotta cladding Piterak®  brings a contemporary and sustainable dimension in the continuity of the original brick architecture.

Conducted within the SA HLM Vilogia Roubaix by Gauthier Leprince, the project for the five towers that were the backbone of the neighborhood. Oriented north-south, they are arranged on the cob along the main axis. The contest project management of this second tranche, was won by the team consisting of Hornoy Cadetel Architects and Engineering. Through this rehabilitation, they held to respect the architectural vocabulary of the existing towers. They are sixty apartments per tower and hundred and eighty in total that are affected by this operation.

The surfaces are previously exposed brick with terracotta cladding Double skin Piterak® TERREAL. Sharp edges are formed with special shingles cut to 45 ° which leave between them a hollow seal to 8 10 mm. Both its epidermis by its horizontal layout plan, Piterak® the siding offers a renewal in the continuity of the original appearance of facades. Following a logic of rigorous composition, gables and facades alternate gray color shingles pearl and ebony. And this logic is reversed from one tower to another. Thus the three towers keep a strong common identity while being distinct.

Only intervention significantly altering the playback volume of the towers, loggias of T3 apartments on the west facades that were initially closed were opened. And the facades are punctuated by two outs, highlighted by the use of a strong paint color and protected by sunshades implanted bare exterior glazing. These sunshades arranged on a variable spacing are made of square elements Autan® range TERREAL.

They were selected in the same two shades siding, but opposition in the shade of lighters on a given facade.

This pose siding allowed to interpose between his skeleton poles continuous mattress 150 mm of insulation. Roofing is 200 mm thick which has been reported. Sliding the aluminum frame were replaced with new frame in triplicate low emissivity glazing PVC. With this action and seeking an excellent airtightness of facades, primary energy consumption rose from 232 kWh / m² / year 65kWh / m² / year of work, Which allowed qualifying rounds of "Low Consumption Building". The sound reduction resulting from this intervention is to 30dB. 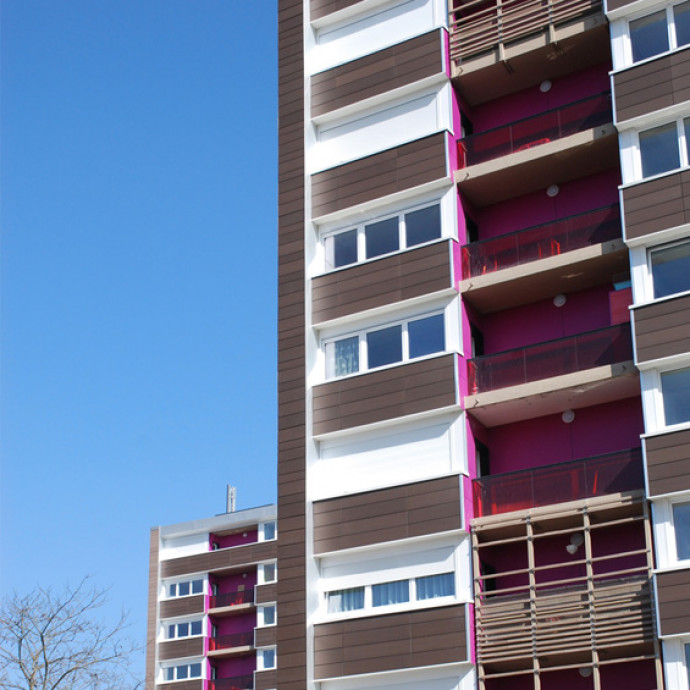 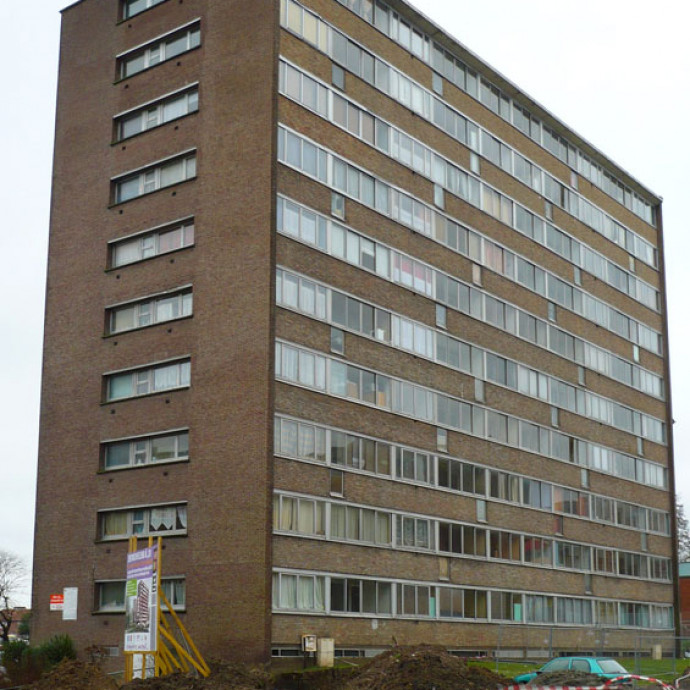 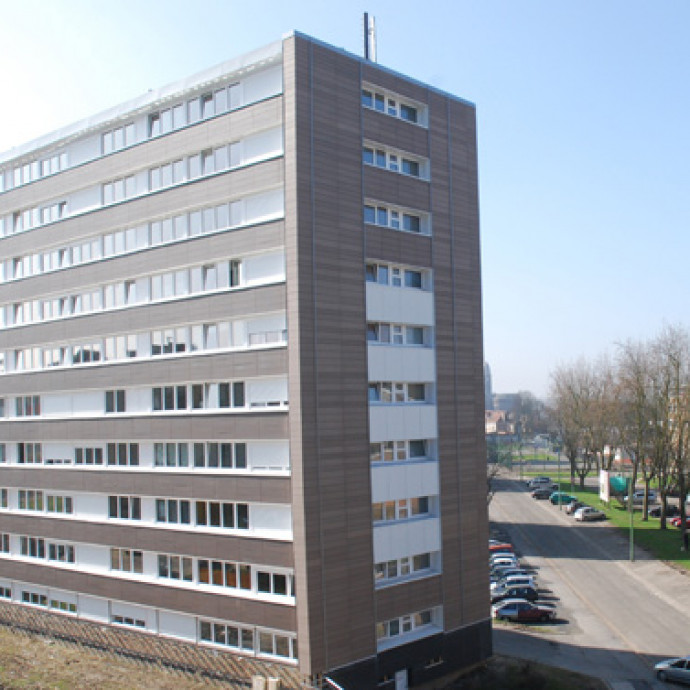 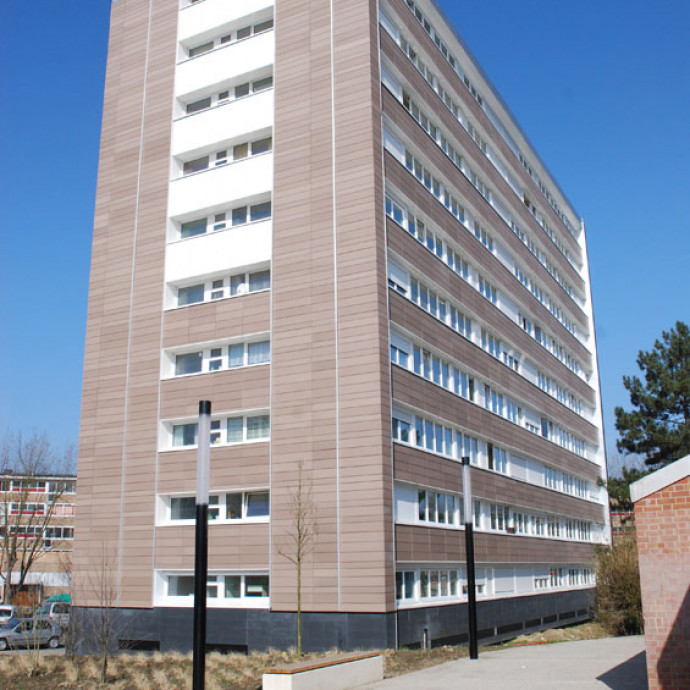 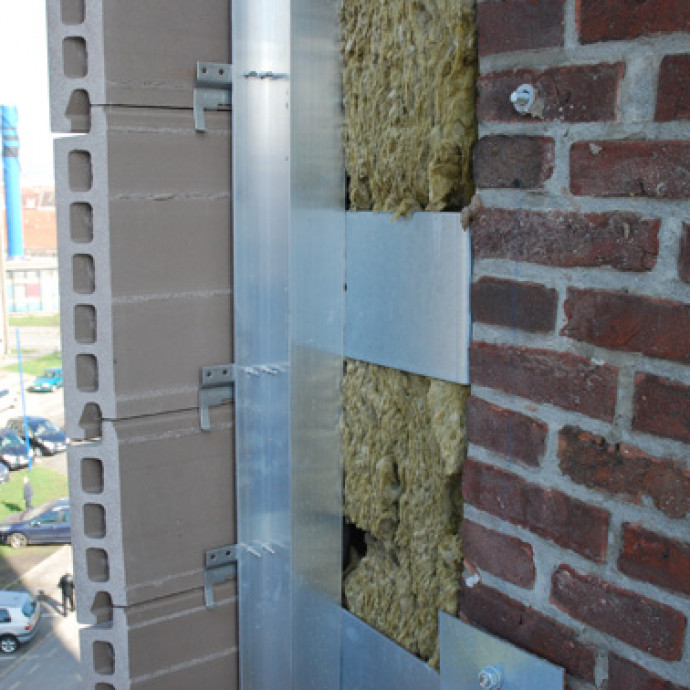 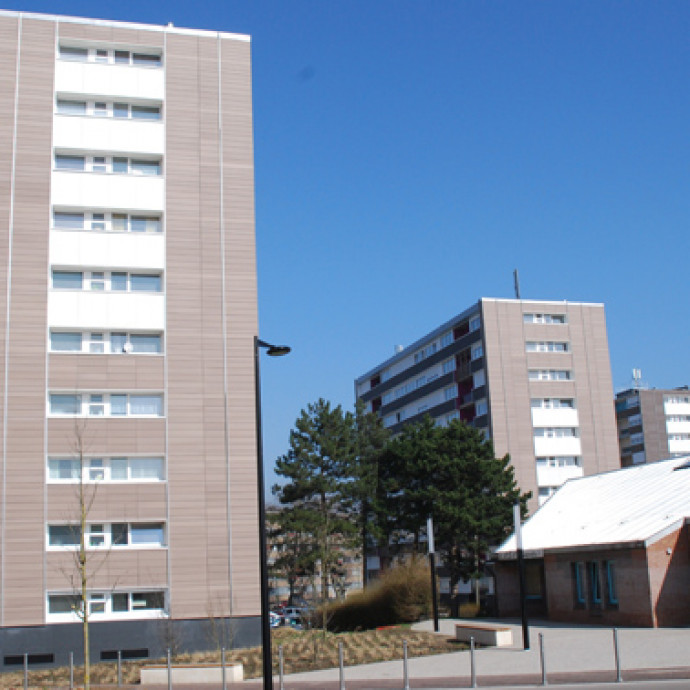 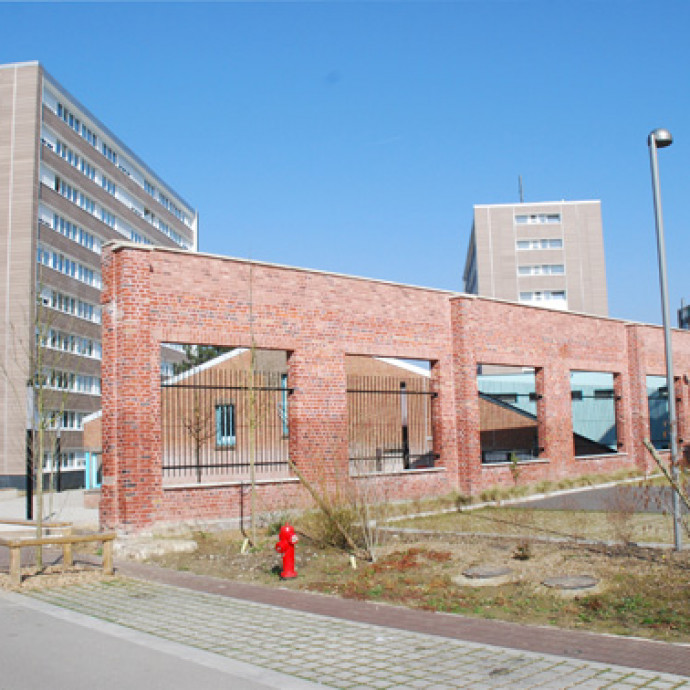