As cultural life picks up again, the contemporary artist duo AROTIN & SERGHEI have taken over the squares in front of the Pompidou Center to install four Infinite Columns of Light alongside Renzo Piano's IRCAM tower.

A monumental installation, these columns measuring respectively 9, 12, 20 and 23 meters high, are each made up of light modules on a human scale, the color and intensity of which vary over time, creating a visual symphony.

Visible from Place Stravinsky as well as from Place Georges Pompidou, these Infinite Light Columns are a direct reference both to the dematerialized digital world that surrounds us as well as to the history of contemporary art and to the place that welcomes them.

Evoking the digital screens that are ubiquitous in our daily life, each module that makes up the Infinite Light Columns is a human-scale representation of an impulse of the innumerable red, blue and green light elementary particles, which together form in varying degrees. infinite intensity each digital pixel, and therefore everything that we can see through our screens. These colorful sub-pixels are indeed the real DNA of today's visual language.

AROTIN & SERGHEI create cycles of “portraits”, enlargements “on a human scale” of these usually invisible particles and impulses of microscopic light, which they call Light Cells.

Thus the "intermedial painting" of AROTIN & SERGHEI combines analog and digital. Each of the light cells is in fact a composition of sequences of images drawn individually, then animated and programmed so that each cell obtains “its own life”. In the installation Infinite Light Columns the infinite development of the impulses of these Light cells is generated by fractal systems, algorithms based on the Fibonacci sequence, and by musical clusters.

These colorful sub-pixels are indeed the real DNA of today's visual language.

"... If we imagined making all of the 24.883.200 luminous corpusules that make up each 4K screen, by Light Cells on the scale of the human body, this would correspond to a work of gigantic and unimaginable dimensions of more than 44.237 x24.883 km, (double the surface of the earth) ...! The disproportion of the project means that the installation along the facade of the Ircam-CentrePompidou is only the beginning ..., a bit of cells emerging from an imaginary matrix, an open composition, a symbol radiating from a breakthrough to infinity ... "

A reference to the Ircam-Center Pompidou both in its use and in its form, the Infinite Light Columns evoke the contemporary art collections of the Center Pompidou, be it the Carré Noir de Malévitch, of which we all have a copy in our pocket with our mobile phone, or the Endless Column by Brancusi installed on the other side of Place Georges-Pompidou. Their musical aspect, both in their variations and in their representation reminiscent of an equalizer, refers directly to IRCAM, the Institute for Acoustic / Music Research and Coordination. Adapting perfectly to the facade that welcomes them, these 4 Infinite Light Columns are also a tribute to the architecture of the Center Pompidou.

Far from being the duo's first attempt, these Infinite Columns of Light are an integral part of the Infinite Screen work-in-progress which has already been exhibited in other forms in high places of contemporary art, whether at the Fondation Beyeler in Switzerland, at the Venice Biennale in 2015, at the Kunsthistorisches Museum in Vienna, or more recently in Giverny. 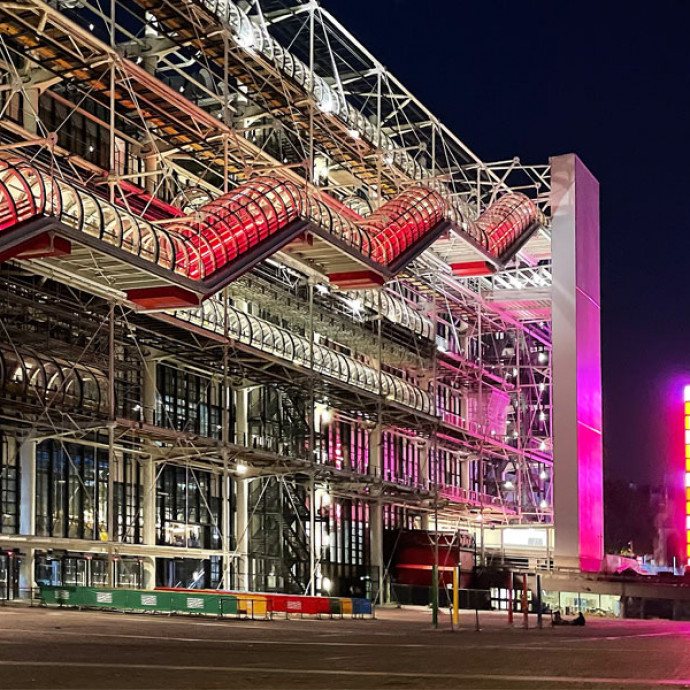 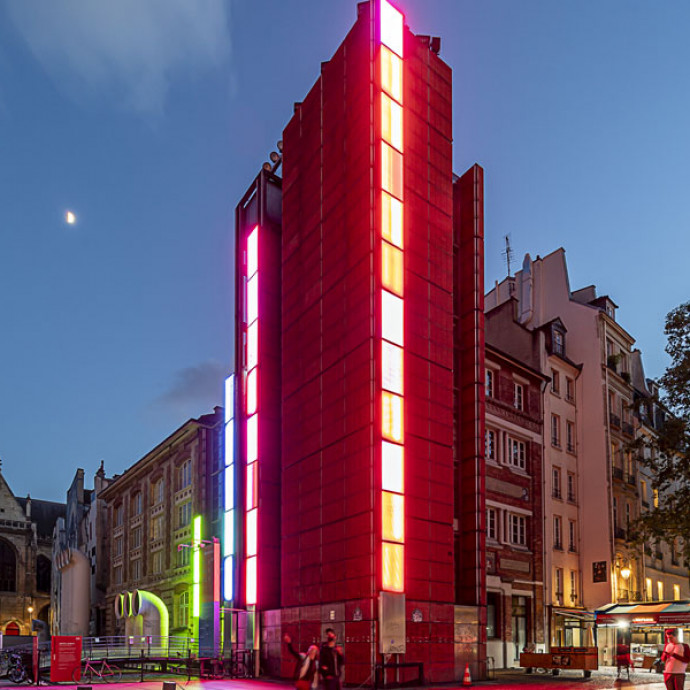 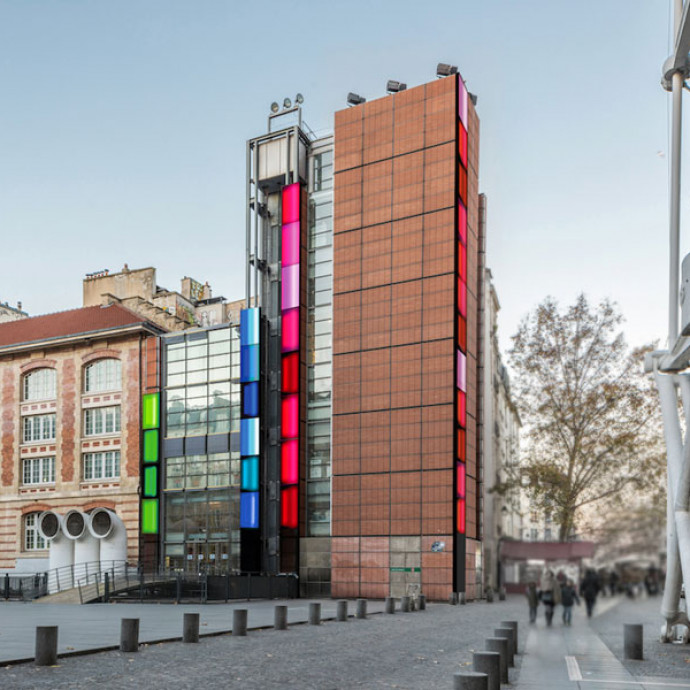 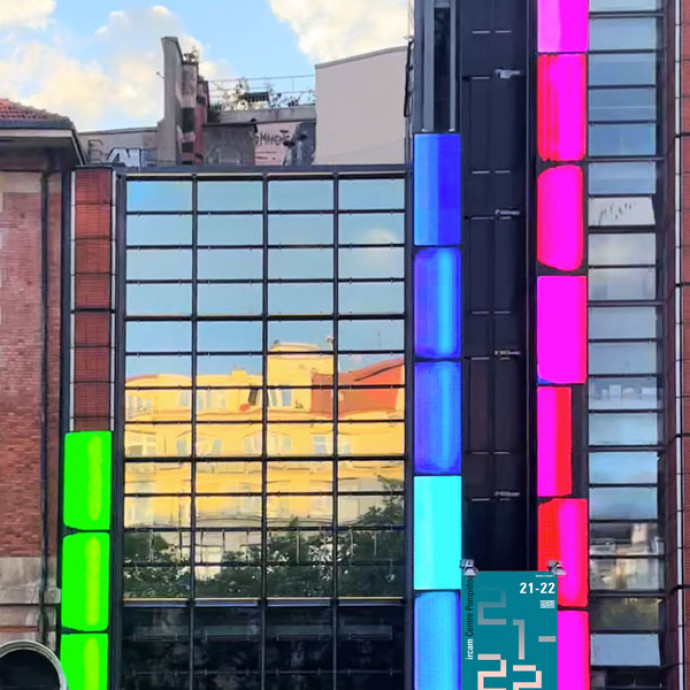 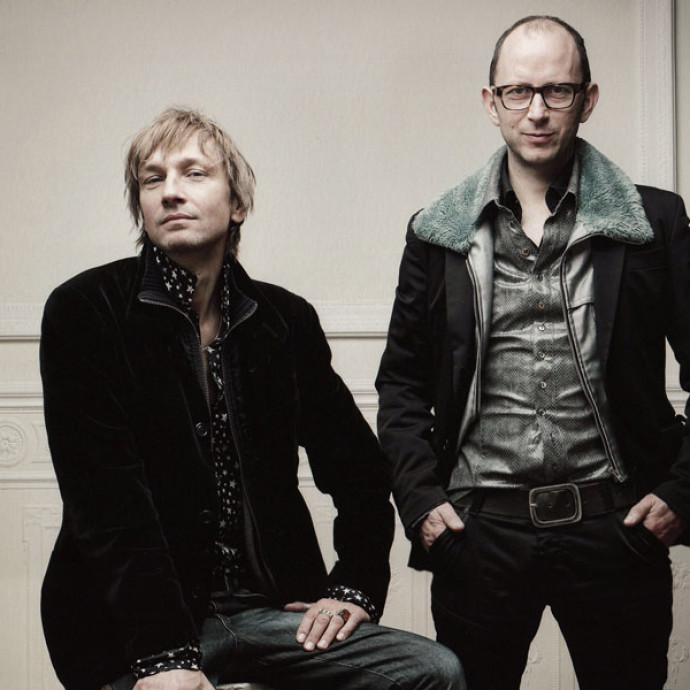