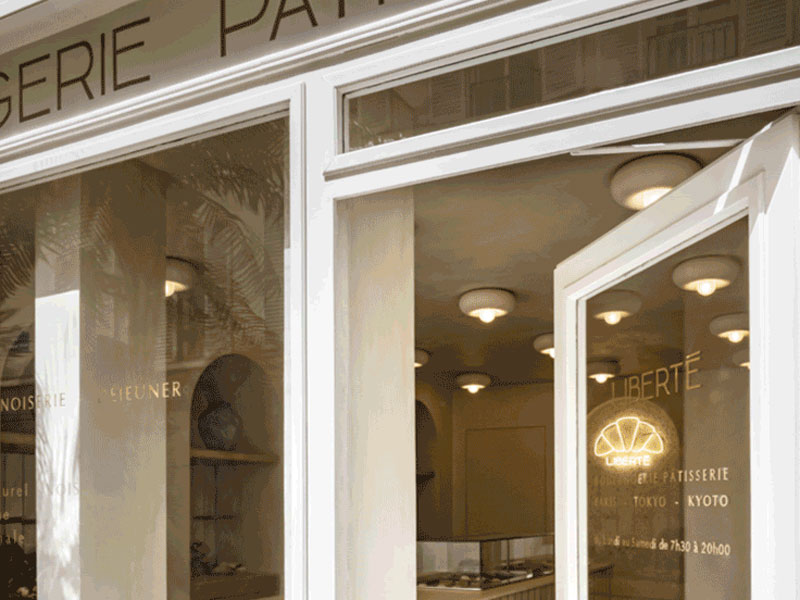 This place was born from the meeting between Mickael Benichou, creator of Liberté bakeries, and Emmanuelle Simon, interior designer.

In this 25m2 space, located rue Saint Dominique in the 7th arrondissement of Paris, the interior designer has had carte blanche. The blue stone floor, reminiscent of Parisian cobblestones, invites passers-by to enter and creates a feeling of continuity with the outside. Once inside, you find yourself surrounded by arches, like a cloister, making the gaze travel between the volumes and the play of light.
The presence of solid wood, shaped by the hand of the craftsman, brings a refinement to this place made to measure. Raku plaques adorn the central island and the arch-shaped niches, and create a rhythmic design. This Japanese ceramic technique, which by a thermal shock reveals random cracks, evokes those of hot bread taken out of the oven.
Other arches welcome customers who sit down for a few minutes in this soothing place to savor coffee and pastries. On the ceiling, 12 lights from Emmanuelle Simon's BABA collection, in chamotte plaster and frosted glass, echo the roundness of the solid wood stools from the same collection.
Through a narrow loophole at the back of the room, we can see the baker who is busy preparing breads and other delicacies with intoxicating smells.

Graduated from the Camondo School in 2012, the Franco-Israeli interior architect and designer Emmanuelle Simon continued to cultivate these two disciplines by making her debut in several renowned agencies, notably with Jean-Marie Massaud and then Pierre Yovanovich. Formative years which allowed him to work on prestigious sites around the world.
In 2017, Emmanuelle Simon created her interior architecture and design agency in Paris.
The same year, she won the Audience Award at the Toulon Design Parade with her installation 'La Chambre sur l'eau' and presented her first emblematic piece, the Cabinet-Bar Raku-Yaki, at the Revelations Biennale at the Grand Palais. In early 2018, she signed the first Parisian address of the Franco-Japanese spa La Maison Evidens de Beauté.

In 2019, Emmanuelle Simon joined the Architectural Digest AD 100 magazine ranking of the best interior designers in the world and received the Wallpaper * Design Award for the 'Best Calm Spot' for La Maison Evidens de Beauté.

The Emmanuelle Simon agency alternates between different public projects and private residences, including a new Hotel in California. At the same time, she developed her passion for design and created her collection of exceptional furniture and lighting.

Emmanuelle designs her projects with a global vision, ranging from architecture to the object. Each place is designed as a unique setting, and thus offers a strong identity. The made-to-measure furniture, designed with high standards and precision, is produced in exchange with craftsmen with excellent know-how. We often find influences from the Art Deco style and the Wabi-sabi philosophy. These inspirations reflect the aesthetic of Emmanuelle Simon, where the raw nature of the materials infuses a note of authenticity into the clearly mastered lines of the architecture of the place. Cleverly underlined by the light, the composition of each volume reveals different perspectives thanks to the subtle transitions and thus renews this notion of experience, essential in the approach of Emmanuelle Simon.

A refined sophistication that does not forget the strength of detail, demonstrating singularity to achieve the right balance. 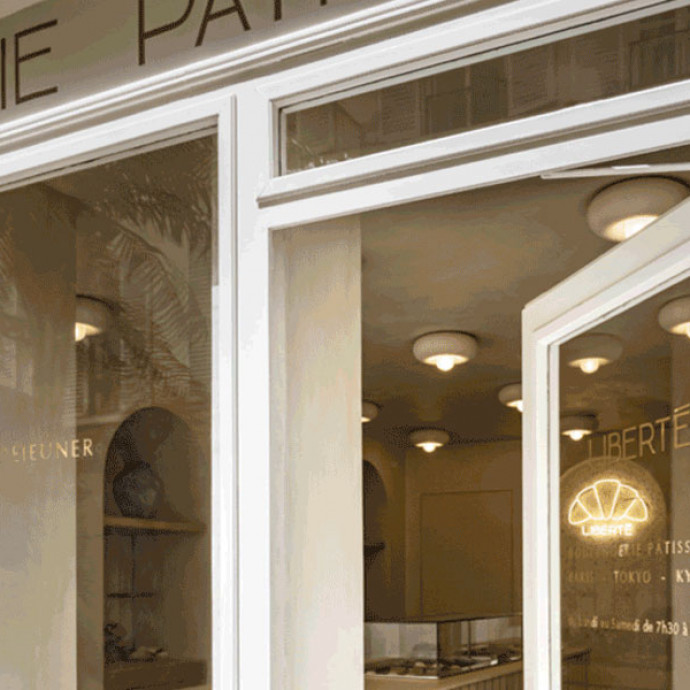