Discover the selection of interior projects selected this year for the ADC Awards.

If, at Muuuz, we like to find small nuggets in unexpected neighborhoods, it is impossible for us to miss the hotel Jardins du Faubourg, a five-star establishment located in the golden triangle of the capital. A project signed Arnaud Behzadi very " Luxury, calm and voluptuousness ".

After the success of the Grand Pigalle (9e arrondissement), the Experimental Group again relies on the talent of the French designer Dorothée Meilichzon for the design of Grands Boulevards (2e arrondissement), a hotel with a typically Parisian identity, located between luxury and spontaneity. Back on a timeless establishment.

The young French brand Okko Hotels inaugurates its ninth establishment. Housed in a historic Parisian train station in the heart of the 10ème arrondissement, this complex disrupts the codes of the traditional hotel industry, from its conceptual audacity to its design interior.

Luxurious lush greenery of Paris, the Place des Vosges is embellished with a hotel offering exceptional views of this emblematic square of the capital. For the "Cour des Vosges", the architects of the Lecoadic-Scotto agency are taking over the walls of the old Montbrun hotel and are proposing a contemporary rewriting of these previously dilapidated spaces.

Long considered a passing city, Lyon (69) is now one of the major French cities. Capital of European culture in 2013, land of the Festival of Lights, Biennale of Contemporary Art, and now hosting the World Cup Women's Football, Lyon has nothing to prove. It may still be a place worthy of its ambitions, between luxury and heritage. And that's where Jean-Philippe Nuel comes in.

No need to book your return trip to treat yourself to a sunny getaway, the La Gare restaurant is in itself a trip in itself. If its old railway facade retains the imprints of its past, its interior by Laura Gonzalez - named designer of the year 2019 by Maison & Objet - makes us quickly forget it.

A stone's throw from the old courthouse in Nantes (44), the interior designers of Urbanmakers imagine a green setting, where taste and gastronomy reign, all hidden behind a green carriage door. Welcome to Canopée, the new temple of cool sleeping beauty.

Winner of the Top Chef television show in 2011, then two Michelin stars for her cuisine at the Prince de Galles hotel in Paris, the French chef Stéphanie Le Quellec has just opened her first gourmet restaurant in the 8th arrondissement. La Scène is set up in a chic setting with the allure of a luxurious boat imagined by the duo Toro & Liautard and invites gourmets from the capital to live an extraordinary taste, olfactory and visual experience.

Nestled in the south of Pigalle, rue Condorcet, the Cuisine establishment has a new look. A small historic butcher's shop in the 9th arrondissement, Cuisine is reinventing itself in a trendy bistro under the leadership of Japanese chef Takao Inazawa and his sidekick, the French oenophile Benoît Simon. Halfway between the Parisian bar and the Japanese izakaya, this friendly place invites gourmets to revel in small fusion dishes and natural wines in a vintage setting signed by the agency Federico Masotto Architect.

Interior designer, Virginie Friedmann surprises with the decoration of the Bistrot Rougemont composed on the theme of the garden, and for which the designer has worked on a nuance of greens. It is in the 9ème arrondissement of Paris that it delivers this renovation of an old Parigote brewery transformed into a restaurant, taking the codes of the authentic bistro à la française but revisited in its own way.

After making a card in Paris, BAM Karaoke Box, the concept of chic and private karaoke, is exported to Bordeaux (33). Located in the heart of the trendy Chartrons district, this new venue offers a second wind to musical entertainment and delighting the budding singers of Bordeaux. Discover a colorful interior by Michael Malapert.

At a time when bio-based and ecological products are in order, the Atelier du Pont agency is imagining, for the organic cosmetics brand Avril, an organic clay interior. For the boutique on rue Montmartre in Paris (1st arrondissement), the architects created a case in ocher tones that perfectly reflected the spirit of the brand.

Behind a typically Parisian facade of rue Charlot (3rd arrondissement) is the new boutique of Enfants Riches Déprimés, a unisex brand launched in 2012 in Los Angeles (United States) by the young designer Henry Levy. Like the American label, the Parisian address of the fashion house distills a nihilistic aesthetic and a taste for ostentation in a minimalist space signed Didier Fiúza Faustino.

Behind this facade of a bourgeois building in Reims (51) hides a hairdresser like no other. Designed by local architect Grégory Guillemain, the Léa Loghan lounge stands out for its refined treatment, combining the charm of the old with elegant contemporary details.

A stone's throw from the Place des Ternes (17th arrondissement) hides a small boudoir where all gourmets are already flocking in search of sweet gifts for the holiday season. For its 6th Parisian address, Maison Damyel calls on interior designer and gallery owner Jessica Barouch and designer Francesco Balzano who imagine a very soft setting, where the traditional “too much” of chocolate factories gives way to purity.

Choosing your mattress is not a piece of cake. We don't know which model to go to, we try in a hurry, embarrassed by the looks of other customers and in a hurry by the salespeople to often leave empty-handed, disappointed with this experience which promised to change our nights. A time now over thanks to Maurice & la Matelasserie, a hybrid place where art galleries, a creative workshop and an intimate space dedicated to fitting custom mattresses come together.

Facing a newcomer to the family without moving? A dilemma that many parents face, including those in the capital's 5 district. Housed in a duplex on the Left Bank, this couple was able to count on the New York and Parisian SABO Project, which transforms a dated apartment into a contemporary and functional fireplace when baby arrives.

Founded in July 2017, the young Parisian agency Pseudonyme proves that value does not wait for the number of years. After revaluing the facade of the famous Circus Hotel in Berlin (Germany), the architectural duo displays their taste for metallic textures and signs a unique place in the heart of the capital's 6th district, between private space, collector's apartment and gallery art. Focus on a studio that we haven't finished hearing about ...

Pauline Borgia, the founder of Atelier Steve, draws on her experience as an architect to carry out the renovation and fitting out of a Parisian apartment of 90 square meters. She imagines a colorful, fluid and luminous interior, where the herringbone parquet floor, the cast iron radiators and the historic fireplaces blend brilliantly with natural or ecological panels, colorful.

Restructuring of a Parisian apartment, Paris (16th) - 05AM arquitectura

The architects Joan Arnau and Carme Muňoz of the Spanish agency 05AM arquitectura took up the challenge of fitting out the interior of an old Parisian apartment of 172 square meters in the 16th arrondissement. Successful bet !

Imagine. A small street in front of the Luxembourg Gardens where Man Ray, Hemingway or Jacques Prévert once put their suitcases. It's in this bohemian Paris with a sweet, nostalgic scent that Studio Razavi signs the renovation of an 145 square-meter apartment welcoming a Franco-American couple. On the program: a warm and timeless ensemble where designer furniture and works of art reign supreme. 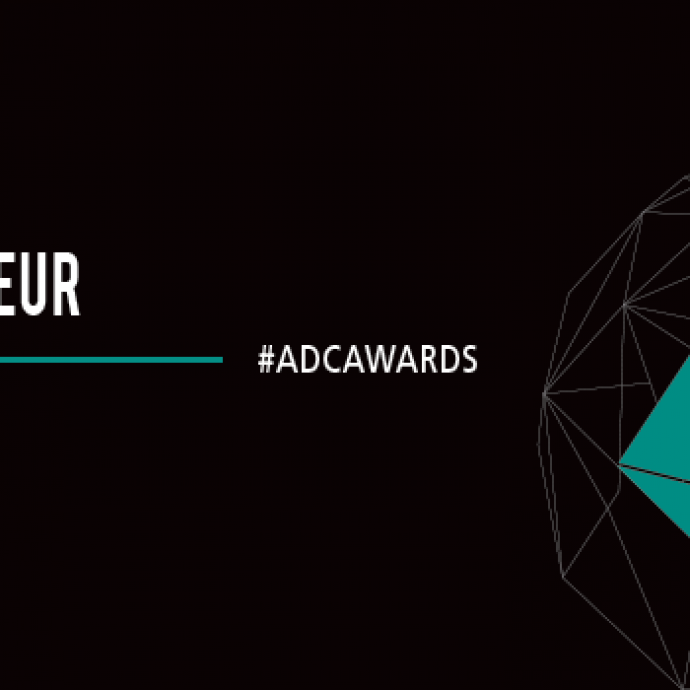 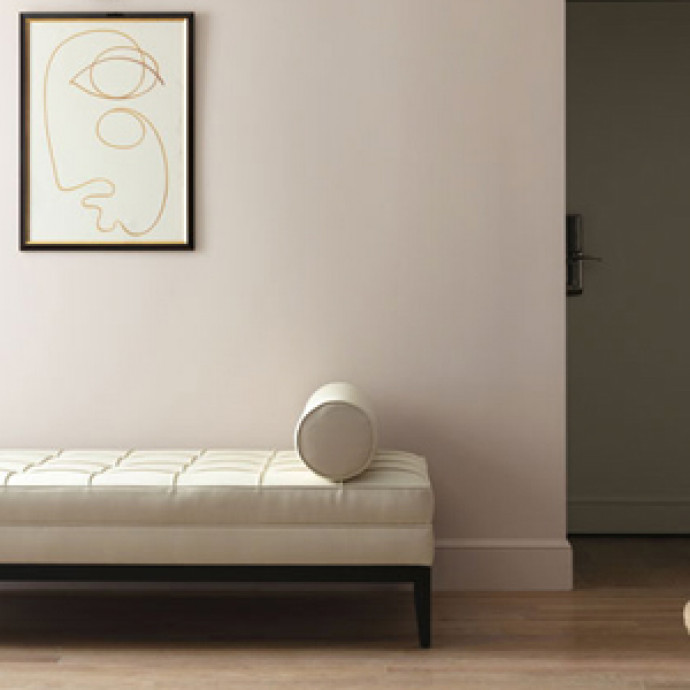 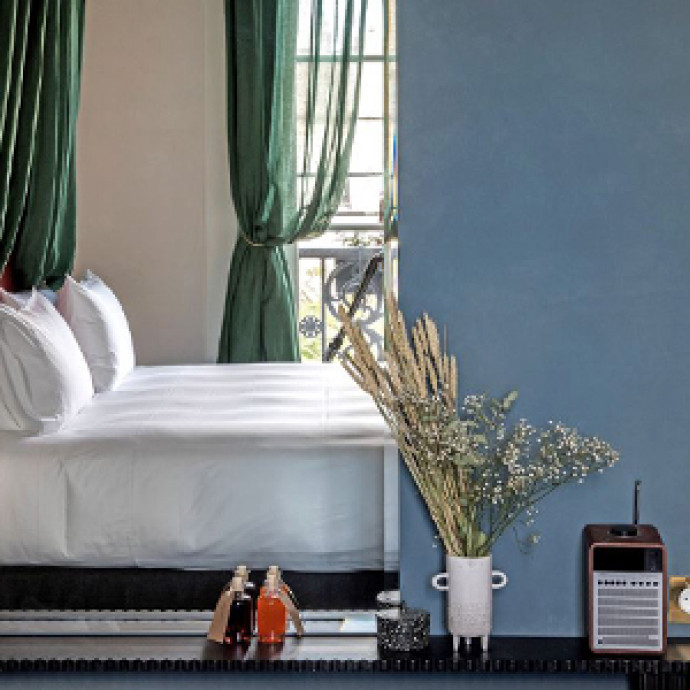 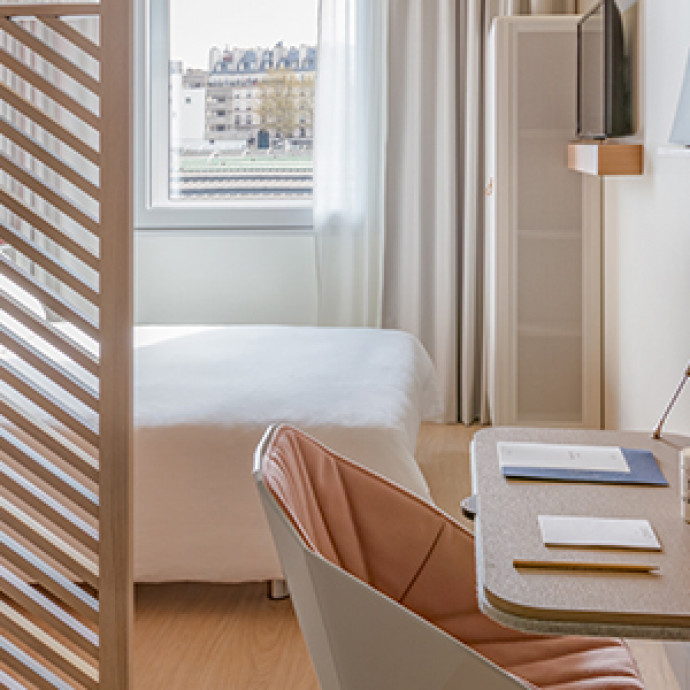 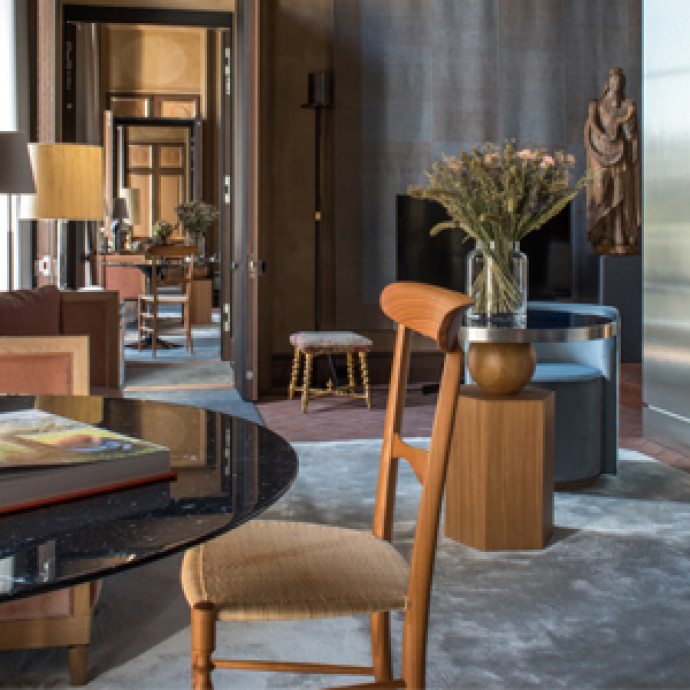 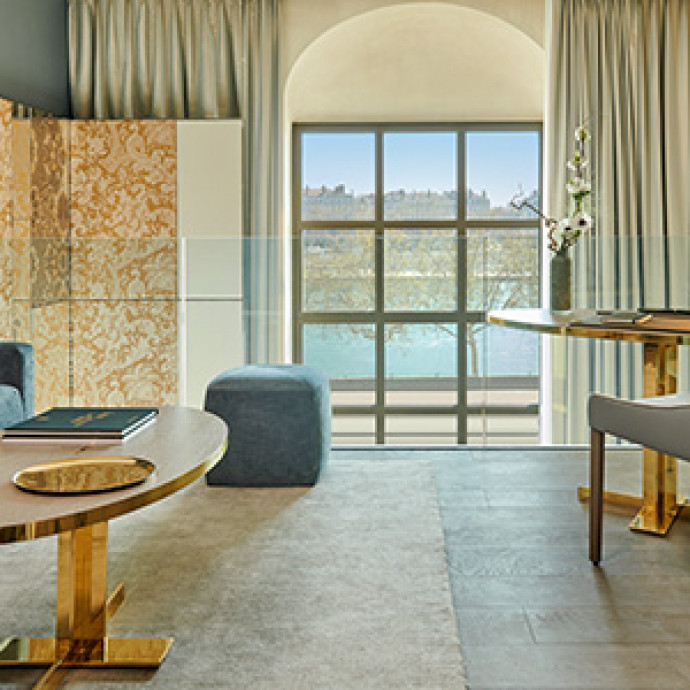 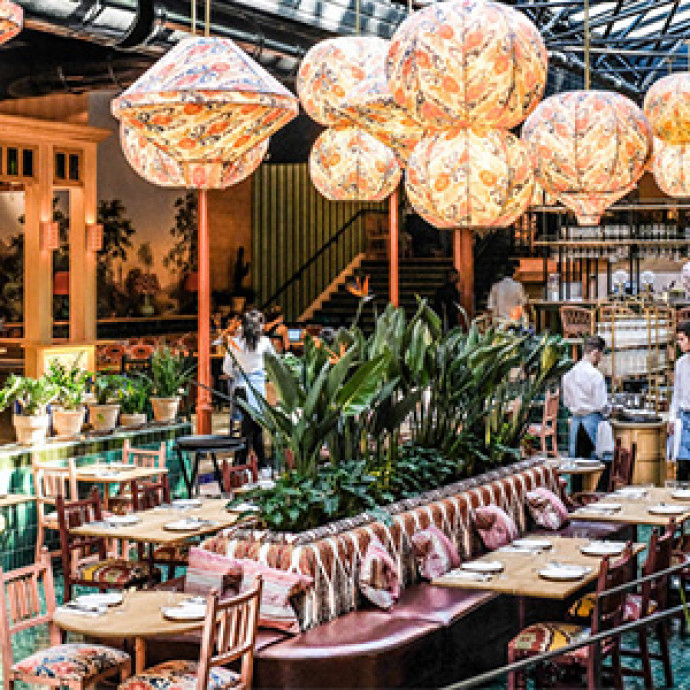 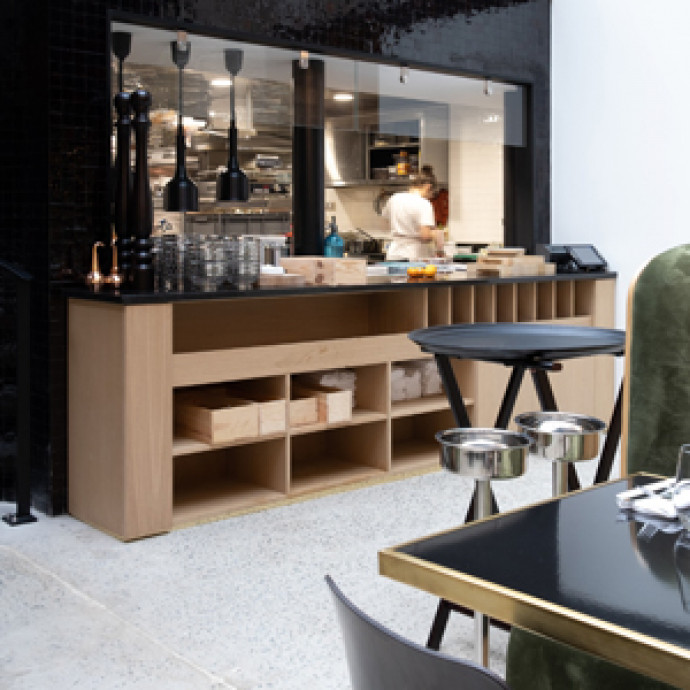 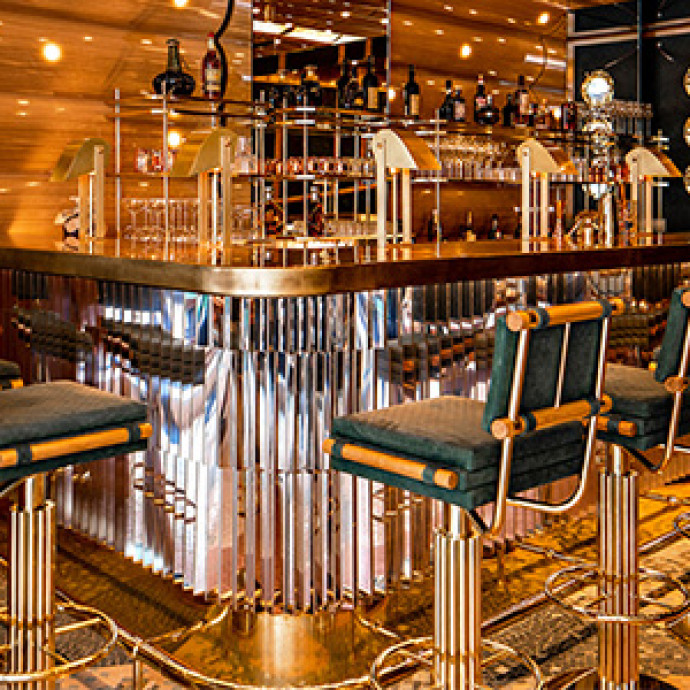 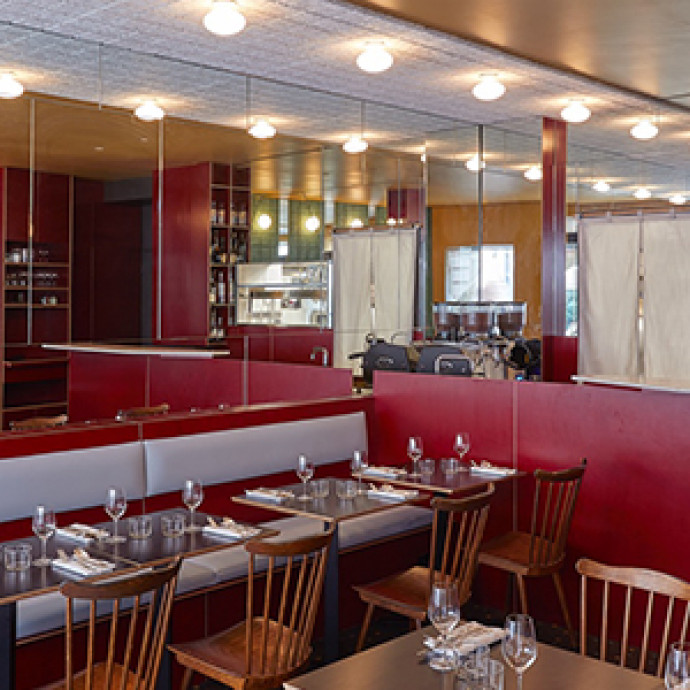 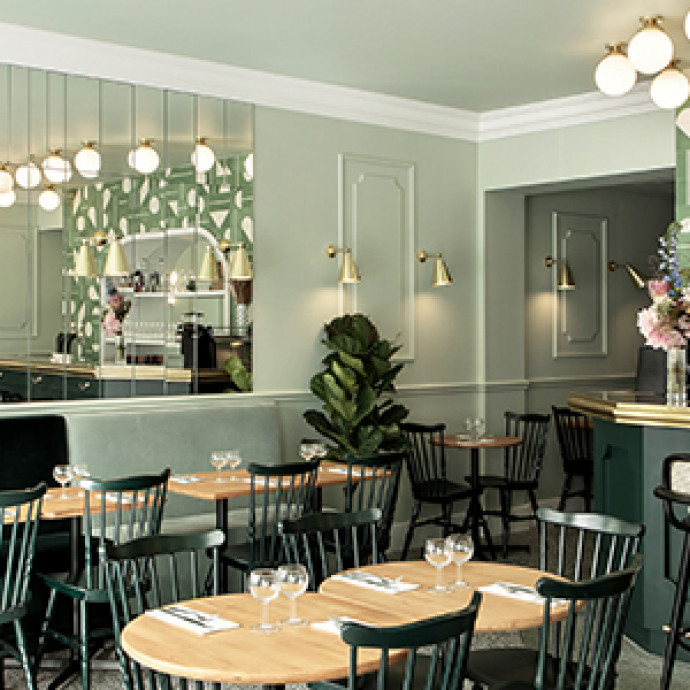 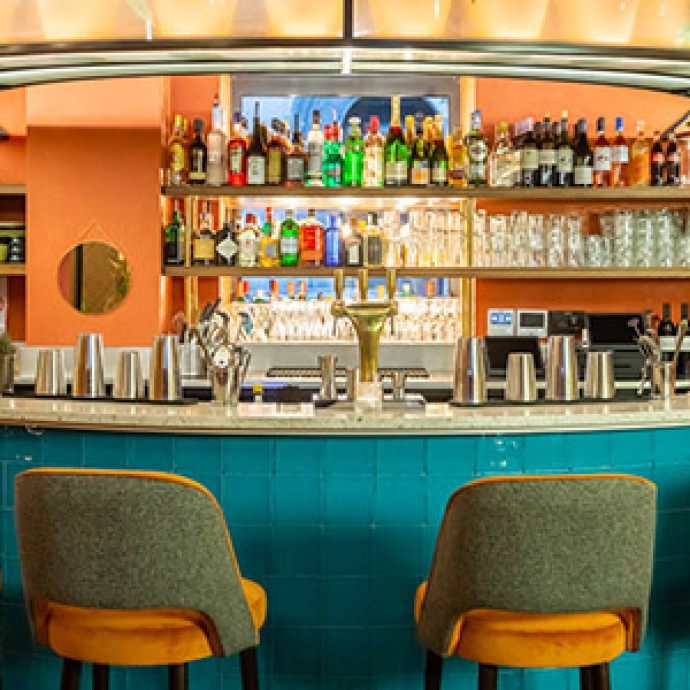 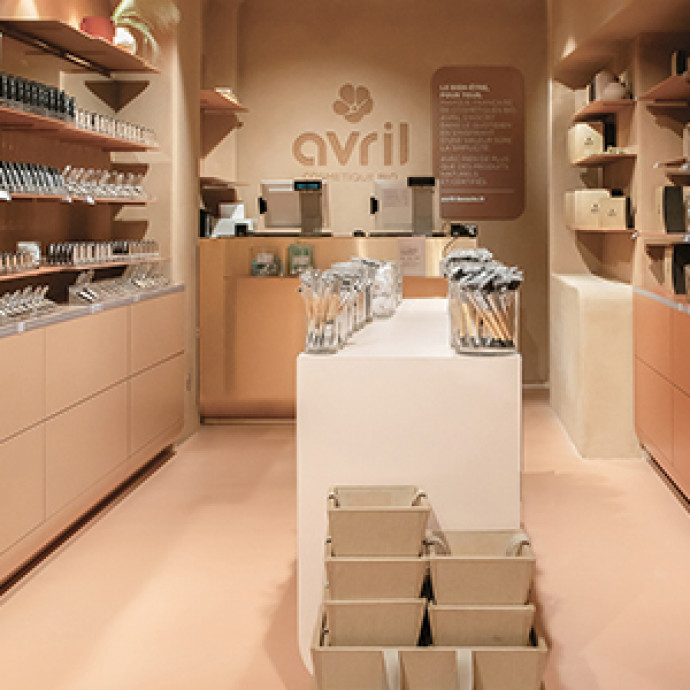 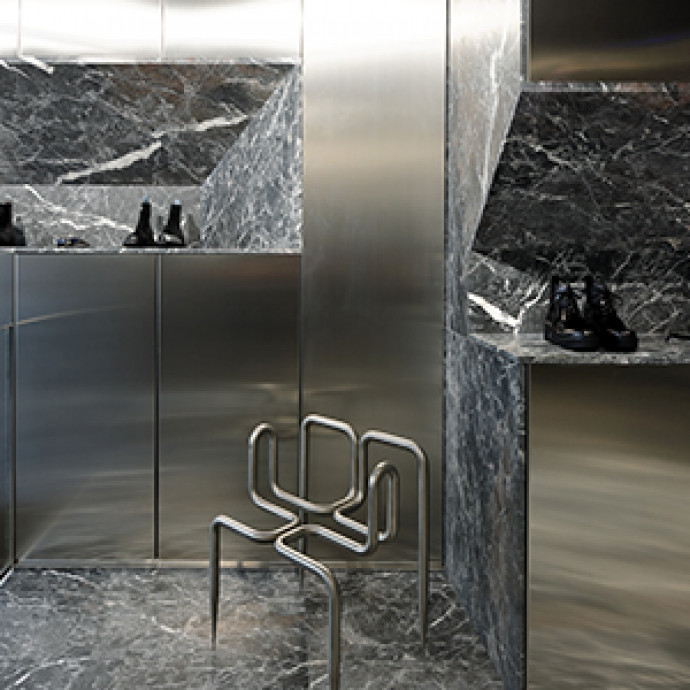 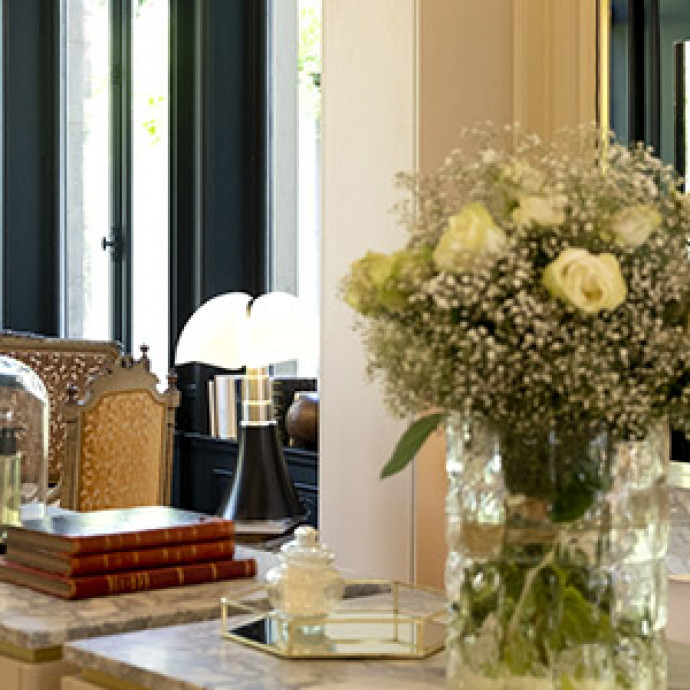 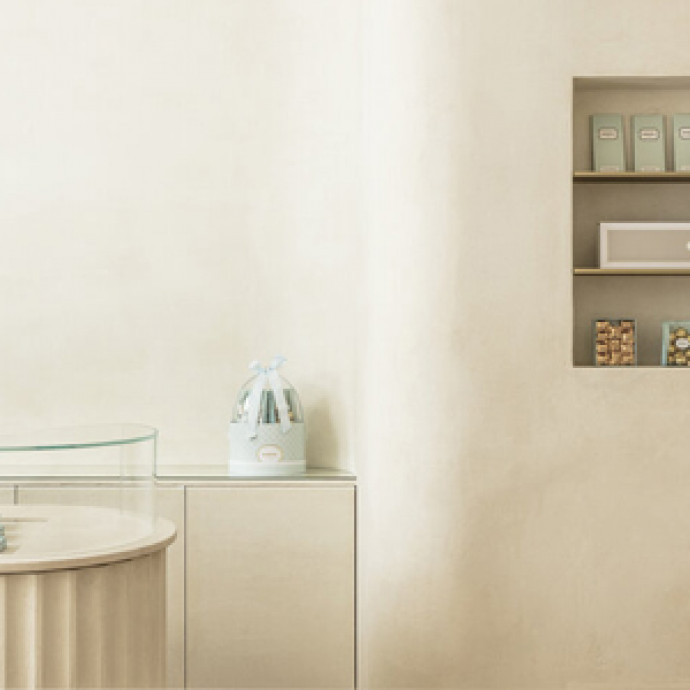 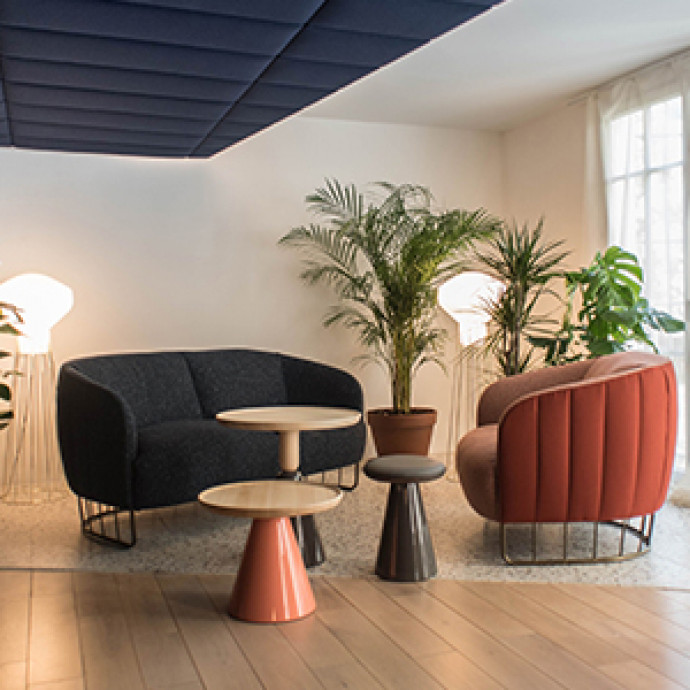 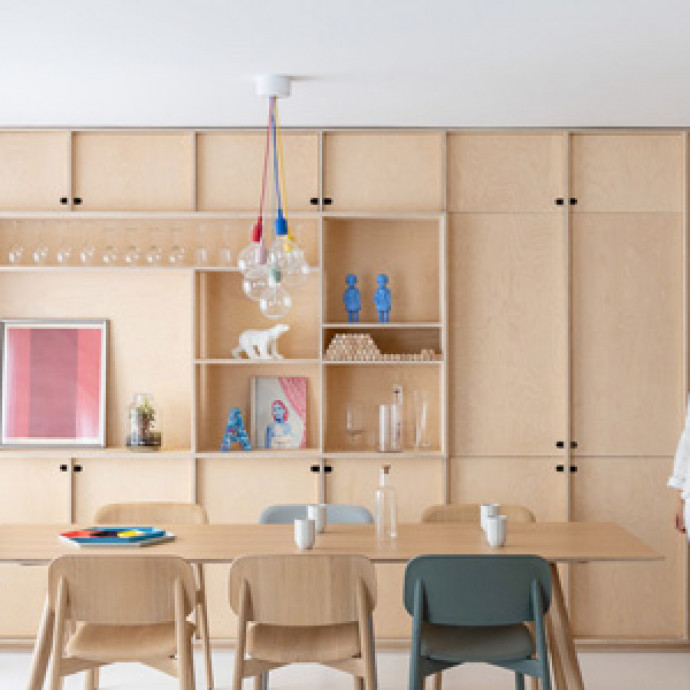 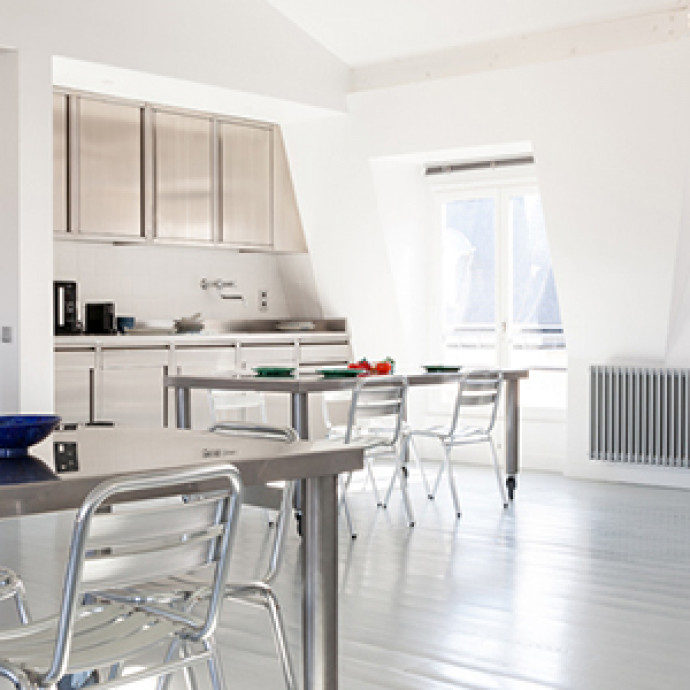 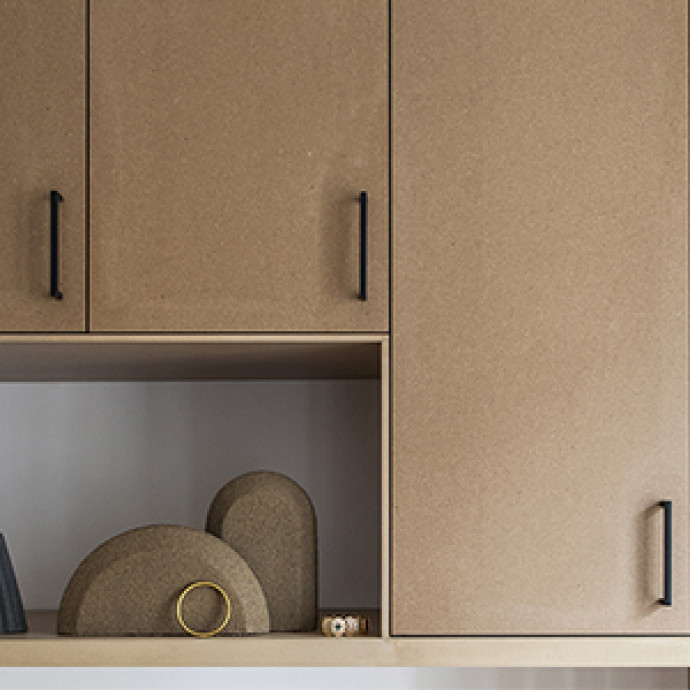 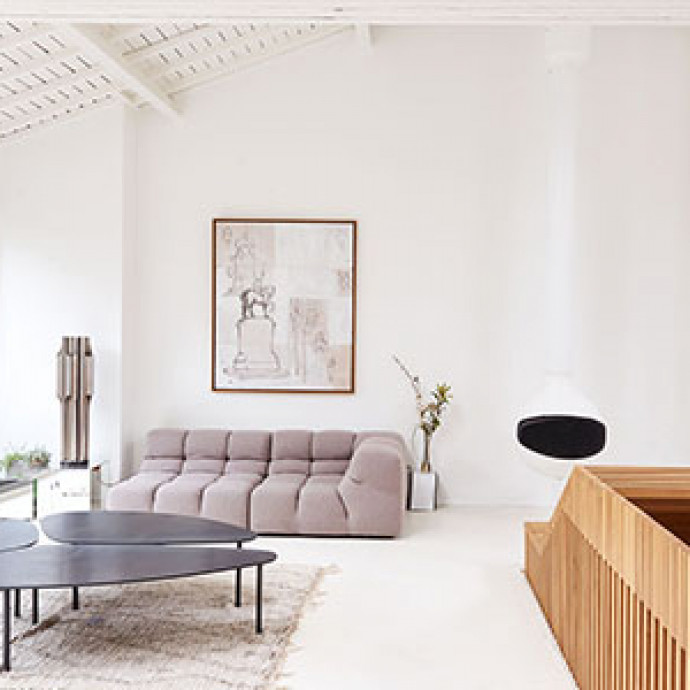 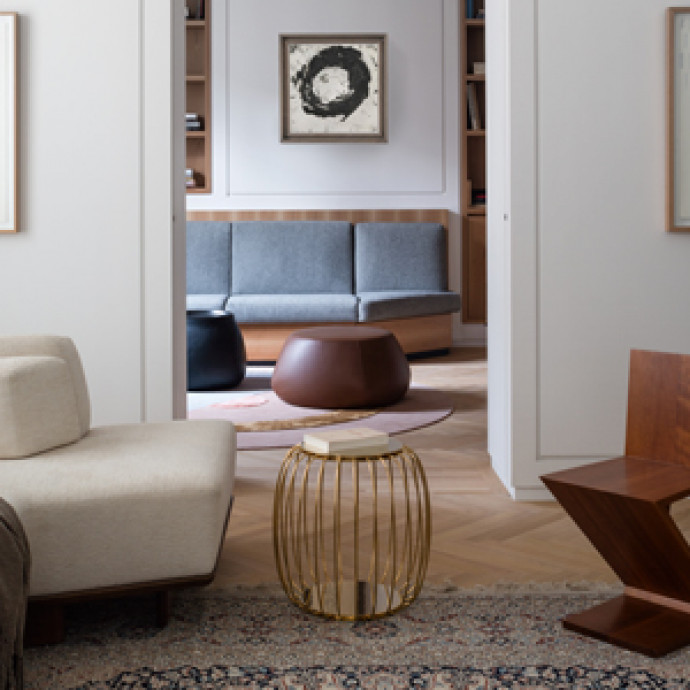